Skip to content
Friday 3rd April
My dreams are even more vivid than usual, populated mainly by people I have lost in real life, swirlings of journeys that never end and stories that never finish. The worlds I visit in them are lighter places than the one we find ourselves in now; they’re filled with the usual convoluted confusion but without a sense of dread. As I begin to wake, the dreamscapes trickling away gradually, I feel a pressure on my chest. Sometimes it’s my cat, purring lightly as she snoozes on me. But usually it’s just a feeling, an inner tension, a stress weighing down on me. It takes a long, hazy while before I understand it.

Spain has reached number two on the scoreboard of doom, second only to America in the number of cases. I wonder, as I always do, why it has spread so quickly here; what is it about this country, as opposed to others in mainland Europe, that has made it easy for the virus to infiltrate this particular piece of land?

I find out that the sirens, explosions and long tolling of the church bells in the evening are actually in support of the health workers in Spain, and not something more sinister. Although as someone said, to sound the sirens every day when everyone is already fearful seems a strange decision. But now I know what it is, at eight o’clock I sense the lifting of the cloud hanging over the town for those few minutes, and join in.

Saturday 4th April
Having decided to accept that creativity is clearly not flowing, and give myself a break about it, I realise that I can’t accept it, or give myself a break. The need for it is too big. It’s an intrinsic part of me, and how I’ve always been, and without that I don’t recognise myself. Just going through day-to-day things, and concentrating on earning a crust, and getting through these weeks staying as healthy as I can, is not enough. I’ve been thinking that because I can’t focus on projects for longer than ten minutes at a time, it’s pointless to even try, but now I reckon that even if the bursts of inspiration are miniscule, they have to be given airtime, and recorded, and be allowed to develop. Even if they just ferment at the back of my mind for a while, at least they won’t be lost.

Sunday 5th April
In isolation exercise news, I think I’m starting to get into a kind of rhythm, finally. Five minutes of five repetitions of five Tibetans in the late morning, fifty star jumps once or twice a day, nine more repetitions in the evening, and a few minutes of ‘before bed’ yoga. I mean, I say I’ve got into a rhythm with it. I’ve done it for two days running now, so I think that counts, doesn’t it? I could stroke should be doing a lot more than that in all honesty, given the pull of gravity on my flesh, but this’ll do for now.

Monday 6th April
It’s been building up over the last few days, with extra mad dashes, extra neediness, extra mewings and grabbing of the rugs, but today my little catette Moustique is officially, blazingly, on heat. It seems impossible that these tiger growls and fiery, spitting hisses come from such a pretty, delicate creature. The last time this happened in earnest was around Christmas and lasted well over a week, almost causing family who were staying with me to lose their minds from her incessant wailing and scratching at doors and windows, and certainly lose endless hours of sleep. At least this time it’s just me. But oh god. This is going to be fun.
My other cat Booshki is swinging between hiding for long hours under the duvet, or joining in her frenzied cries and attempting to do as she is commanding. I don’t know what he’s doing. He certainly doesn’t. He must have missed that class in cat school.
I try putting on the background music I use for my five Tibetans (whatever came up first in YouTube when I typed in ‘yoga music’,) thinking the endless rounds of long, slow, barely-changing chords and sounds of nature might soothe her. It doesn’t. It just makes me go insane, once I start tuning into what’s actually happening musically, i.e. nothing, for hours and hours. I stop it and put on some hiphop instead, very loudly. It doesn’t seem to help her, but I feel better.

Tuesday 7th April
In isolation cooking news, after all my hopes of expanding my repertoire and venturing into tiny but perfectly-formed and delicious tapas territories, I have to say that nothing experimental has happened. Unless you count putting red pesto into black tea. I swear the jars of pesto and honey look the same. Perhaps I’ll move one of them to a different spot. Oh, and a soluble tablet of multivitamins found its way into my muesli instead of into my cup. That was interesting. But probably quite healthy. And there was that time when coffee grains were spooned into the eggs I was about to scramble. Which were still scrambled, after a bit of a clean; after all, we’re rationing here, can’t waste two perfectly good eggs. And actually the hint of Arabica was almost nice; I could be onto something here.

I’m torn between being annoyed at the ‘groundhog day’ of it all, where days look so much like each other and new routines and habits are starting to be boring and making me itch, and being glad of those same routines and habits that are grounding and stabilising me, and holding the days into dealable-with shapes. Can I be both?

Wednesday 8th April
I wonder what my neighbours think I’m doing when my front door is crashed into repeatedly from the inside. Hopefully they can’t hear. My cats are hurling themselves at it at regular intervals; normally that’s the boy cat Booshki’s favourite thing to do around lunchtime most days, but now it’s Moustique and her raging hormones letting rip. Isolation madness. I’ve been feeling relatively positive and calm in the last few days, possibly because the cases in Spain seem to be dropping and that’s giving a sliver of hope that lockdown might not actually last until I’m ninety-two, but her incessant, unrequited yowls and roars waking me up all through the night, Booshki’s responses, and now this door attacking are making my underlyingly frazzled nerves positively crispy. 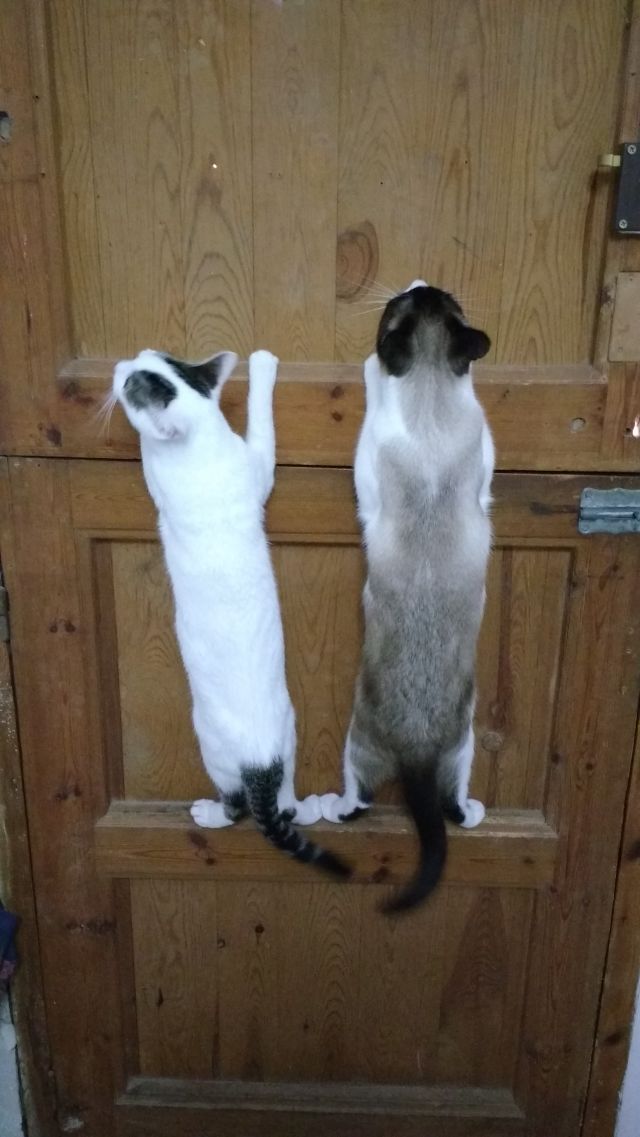 Thursday 9th April
A lethargic day, a down day, an easily stressed and irritated, impatient day. An overcast day, then a rainy day, a heater-on day. A build-up of not enough sleep, a feeling of claustrophobia and panic when I hear on a friendvine that the lockdown will be extended well into May, and even when I can’t find any evidence of that being true on any of the news outlets, and even though I already expect that to be the case, it’s too late to unthink it, too late to unpanic. A day just to get through, to sleep off, to accept my vaguely depressed inertia and hope tomorrow will be better.
I just saw this quote and liked it:
“Finish each day and be done with it. You have done what you could. Some blunders and absurdities no doubt crept in; forget them as soon as you can. Tomorrow is a new day. You shall begin it serenely and with too high a spirit to be encumbered with your old nonsense.”
Ralph Waldo Emerson

And, ultimately, today is a day of perspective. This is day twenty-seven. Nelson Mandela spent twenty-seven years in prison.